The North Ron Diaries: 30th May

It begins with darkness. A bang. Light and Mark's head around the bedroom door.

"Get up. Gav's caught a Catharus thrush."

I swim through my head. It doesn't make much sense. George has said enough times this spring that he's going to go out in the grip of a westerly gale and find a Catharus thrush that I started to think he was mad — I went mad telling him it wasn't autumn. In a half awake state I decide that yeah, I really should get up. I swing out of bed. Proceed to put both legs through one trouser legs. Stagger downstairs. Coat over pyjamas. Tumble out the door and into the Land Rover. We tear off up the road.

We find Gav in the ringing hut with a bird bag. Mark heads in and we wait outside. He pulls the bird out and checks the underwing.

"Well it is a Catharus thrush"

I crane my head around the door and it all becomes stunningly real. In mark's hands was a brown bird slightly smaller than a song thrush, white underneath and with no visible spots. Gav looked ashen, slightly shaky, as if he'd just seen a ghost. What he'd found in the bottom panel of the Holland House mist net was better than that. An American passerine brought in by the westerly winds. 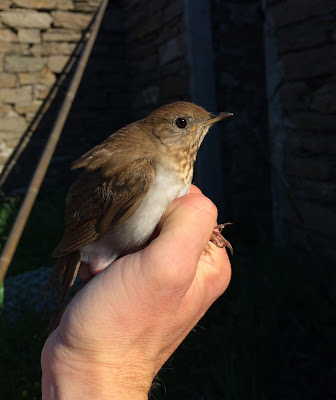 Mark sets to work in the shadows of the early morning, with the measuring implements, inspecting the wing feathers and taking down the formula of emarginations and length of feathers in the wing, while Kevin and Alison pour over Pyle, the American book of bird biometrics.

I've spent a large part of my recent history revising American birds and when confronted with one all of my knowledge vanishes. It didn't make much sense. Opinions are bandied around and the identity veers from Grey-cheeked Thrush to Swainson's Thrush to Veery. It lacked the expected features for all of those species: no grey cheeks, no buff tinge to the face, back brown without red tones. It can't be a Veery I say. At this point the atmosphere is confusion and stress. The bird is quite worn, lacking in fat and with no pectoral muscle, the signs of a migrant having finished a very long, strenuous journey. Because of that, we bring the bird out into the light for some quick photos before releasing it. As we do, the bird is moved out of the shadows and into the sun. It lights up. The brown becomes strongly reddish, the white glistens silky like bunched spider webs and the pale brown spots sparkle. Consensus is reached: it must be a Veery. Mark lifts the bird's wing up and we all see the pale long line across the underwing between thin and thick dusky lines. 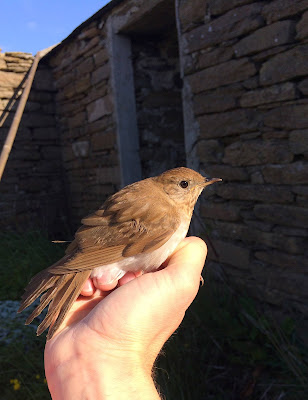 Gav gets a high five and several hugs. He appears to breathe for the first time since finding the bird.

The bird was released over the road in the sunlit church grave yard, where suitable cover exists for it. It dives from Gav's hand and makes it to the small sycamores along the far wall, where it would spend the rest of the morning showing well amongst the branches, while it fed and recuperated. In the branches the bird's identity seems much more obvious. When it hits a patch of sunlight it dazzles bright white and rich fox-brown. When it's not in the light it scurried through deep in the bush, like an oversized American nightingale.

After two hours of views in the field I left for breakfast with cows twitching the Veery twitch. The sky was rich blue, as blue as the sea. Britain's eleventh record of a Veery sang after I left until half eleven, when it vanished unseen into the bright Saturday noon. 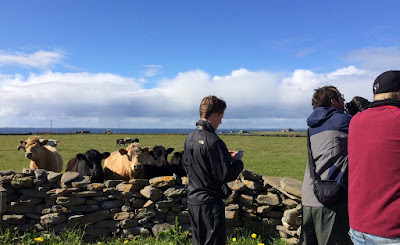